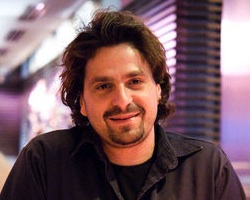 After a two year hiatus, Joe Mercuri is back. A decade after an enRoute "Best New Restaurant" in Canada win, the former chef at Brontë returns with an ambitious new venture. The space, in the same Wellington, corner Soeurs Grises edifice as SoupeSoup, is well familiar to the Cité Multimedia and Old Montreal lunch crowds.

Mercuri, the tentative name for both restaurants - yes, two restaurants - will be a strictly dinner affair for now. Chef Mercuri recently shared some other tidbits about his new baby.

You're back. How does it feel?
Incredibly exciting. I've been gone for two years and people here in the city have been so supportive, coming up to me all the time and asking me what I'm up to. It feels great.

So the new place is called Mercuri ...
Actually we're doing two new places in the same space. One 40 seater, one 60 seater. The 60 seater will have a wood burning and charcoal oven. I'll be cooking directly on the embers and plan to do a lot of vegetables in ashes, stuff like that. It'll be casual but with a higher level of service than at Brontë.

And what about the food?
That's what everyone wants to know. All I can say is that it won't be Italian, French or Asian. I mean I grew up in an Italian family, my technique is French and I love a lot of Asian ingredients but I've been thinking about this a lot lately and it hit me the other day that my cuisine is "Modern Montreal." That's not me trying to be trendy or cool but look, I'm a Quebecer, a Montrealer, and I cook with what I'm surrounded by.

What will be the differences between the two restaurants?
The smaller place will be more fine dining. The 60 seater will have a more casual feel to it. I was very young at Brontë, almost out of culinary school, and I had certain ideas back then. Now I find myself more relaxed about things like décor and music. We'll be bringing the same level of knowledge to the food and service at Mercuri, if not higher, but the tone will be more relaxed than at Brontë. And a better restaurant.

Who's part of the team?
That's what's been so much fun. A lot of the same people from Brontë. Tina An is back, she'll be the general manager. And Fred Gillette will be maître d'hotel.
· Fine Dining in Montreal: 100 Meals at Brontë [Tourisme Montreal]
· The Juice [PMA Productions]
[Photo: PMA Productions]