A Sunday walk to procure the second-to-last loaf of carraway rye at Mile End's new kid on the block turned into a crash course on how to open a state-of-the-art bakery. Hof Kelsten's Jeffrey Finkelstein has a busy wholesale business but has gone next level with his spiffy new retail shop on Saint-Laurent, above Mont-Royal.

The former SuperClub Vidéotron, Zébulon Perron design job is a far cry from your average Première Moisson. And so is Finkelstein's bread, if you accept the tastes of clients like Le Club Chasse et Pêche, Le Filet, Les 400 Coups, Joe Beef, Nora Gray and Toqué!.

This Bongard is the Rolls-Royce of bread ovens. It was shipped from France and assembled here. There's a Bongard dealer in Montreal who knows his stuff. He comes in and offers technical support. This oven is similar to the one we had at Per Se [Finkelstein did a stage at Thomas Keller's New York restaurant, as well as The French Laundry].

As he gave a tour of the premises, Finkelstein, despite the sleep deprivation that comes with any new business, made energetic sweeps of his hands.

The entire front area here, the cash, counter and bread display, is as big as my former wholesale space. Now I have proper walk-ins, storage and space for my equipment.

Bread is very tricky and water is key so we've made some investments to ensure consistency no matter what the season. I also have a separate walk-in just for my doughs and starters. This one is my original sourdough that I brought back from Spain years ago. When I took it on the plane it was in a small jar. 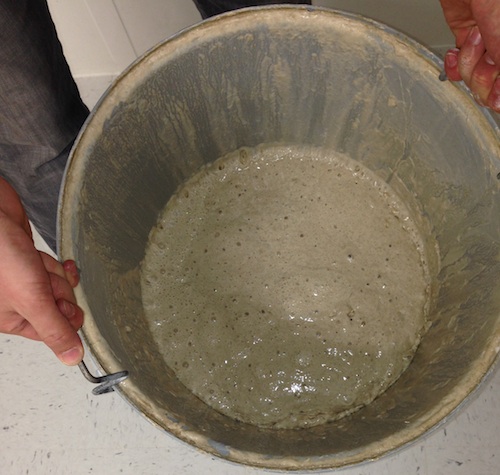 Finkelstein spent 14 months in Spain in 2007-2008, first under the tutelage of master chocolatier Oriol Balaguer and then under Ferran Adrià at elBulli. Hof Kelsten has no plans to go molecular but a methodical approach when it comes to technique and ingredients is evident. And above and beyond a full range of bread and pastry, Finkelstein has other plans.

We have a smoker in our prep kitchen over here. We plan to do a very traditional Jewish range of products. No pork, no pork fat. And not just for sandwiches either. Customers will be able to come in, grab a bread and a tray of smoked fish to go. Nobody's really doing stuff like that anymore. We're fortunate to have this space too. We're a bakery but this kitchen is bigger than some of the ones my wholesale customers have. And I have Hakim [former Brontë sous-chef Hakim Rahal] in the kitchen here. He knows his stuff and has pretty much a blank slate to do what he wants.

Finkelstein had one more important item to discuss: coffee.

I know good coffee from bad but I'm not a connoisseur like some people. We had some help from Anthony [Benda, of Myriade]. The machine is in place and I will hire a proper barista. We tried Intelligentsia and some other roasters but ultimately went with Café Saint Henri.