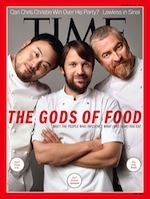 Fresh off the Time magazine male-centric 'Gods of Food' controversy, Gazette critic - and former pastry chef - Lesley Chesterman has thrown in her two cents. In a column with the provocative subheader "Men continue to dominate the world of haute cuisine - maybe that's not such a bad thing", Chesterman quotes Time editor Howard Chua-Eoan's interview with Eater and writes: "To get to the top, being tough is not enough. You have to be a barracuda." [Gazette]