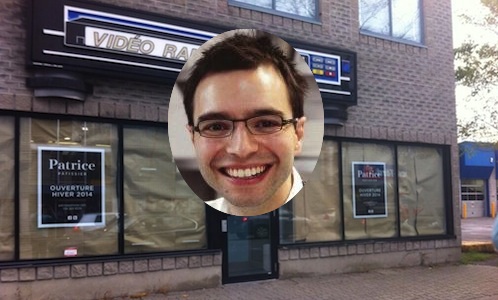 In a recent interview with Eater Montreal about the shake-up at Les 400 Coups, Patrice Demers gave a hint about his next move: "As far as the concept, the approach will be to combine a pâtisserie with a dessert and wine bar under the same roof."

Soon after, Demers told his twitter followers that the locale was in Sud-Ouest Montreal, close to Atwater Market. As it turns out, Patrice Pâtissier is at 2360 Notre-Dame, corner Vinet, one block from the strip that includes Limon, Burgundy Lion, Théâtre Corona, Geppetto, Le Vin Papillon, Lili & Oli, Liverpool House and Joe Beef. The shop will open early 2014.
· Les desserts de Patrice [Official Site]
· Patrice Demers on the Shake-Up at Les 400 Coups [EMTL]