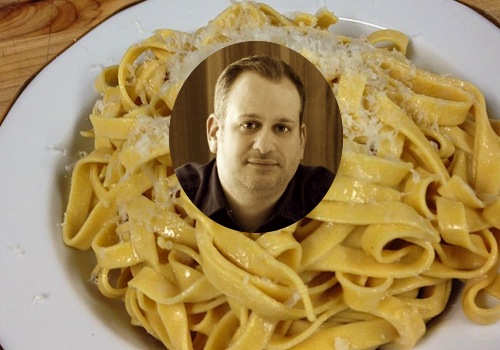 Michele Forgione, of Little Italy's Impasto, went public this week with his earnest attempts to create a viable gluten-free pasta for his restaurant's menu.

"Ok here we go... It's Monday morning and time to test out some gluten free pastas. Texture, mouthfeel…"

The chef spoke to Eater Montreal today about the gluten-free experiments.

Why gluten-free pasta chef?
I know they say that only one percent of the population has celiac disease but a lot of people want to go low-carb. Plus, as a chef, I like to experiment with different recipes. We have the [pasta] machine in the restaurant so why not?

What kind of flours have made the cut so far?
Chickpea flour, amaranth flour, all organic. The results have been decent so far but I have to work on hydration. The tastes are very different too. I can see myself doing something with mushrooms and the amaranth pasta. It has a nice, nutty, brown rice kind of flavour to it. It's not a pasta exactly. It is but it isn't.

What would your nonna say about this?
[Laughs] What would my nonna say? She'd say 'Michele, pasta is pasta, leave it alone! You're wasting your time!'. But I'm a chef first and I have to test my creativity. I want to find a recipe that is palatable for me and for the customers.

So when will we see gluten-free pasta on Impasto's menu?
I have a couple more recipes I want to test but probably after the holidays. By January most likely.