Share All sharing options for: clubZone.com Presents the Best NYE Parties in Montreal 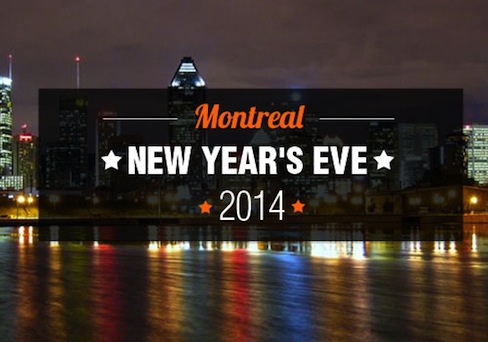 It's that time of year again—the time when party-goers scramble to make plans for New Year's Eve. No one wants to be left out in the cold, especially not in a place like Montreal. New Year's Eve has to be done right—where you are, who you are with, and what you are doing sets the tone for the upcoming year.

Montrealers already know how to brave a winter chill, but now clubZone.com is making it easy to find the best end-of-year festivities in town. As the clock strikes midnight, raise your glass and feel good about 2014. Take the first step and check out these suggested venues.

10. THE ULTIMATE NYE'14 EXPERIENCE
Where: Jet Nightclub
When: 8 p.m. – 3 a.m.
Who: 18 + The International Globetrotter Set
Why: Experience the heat and intensity of a party that brings the world to your feet. At Jet Nightclub you'll celebrate the New Year alongside over 1,000 other partygoers on multiple levels and one massive dance floor. Couple this with their ultra-modern sound system and the 10 DJs playing the hottest music of the day, it's no wonder that Jet Nightclub has been voted Montreal's Best Dance Club. Indulge by purchasing one of their signature VIP packages or simply enjoy the 5 hours of open bar, included with every ticket.


9. I LOVE NYE 2014: VIP TREATMENT
Where: Arena Montreal
When: 8 p.m. – 3 a.m.
Who: 18 + Young Urban Chic
Why: 7 Hours of open bar makes this club one of the best deals in Montreal this season. Surrounded by young socialites and icy-glam décor, Arena will have guests warmed up in no time. Take in the wall-to-wall laser show, while a mix of top 40, House, R&B, and club anthems pump through the sound system. Arena reminds patrons to live life to the fullest on New Year's Eve and during the year ahead.

8. Montreal New Year XS 2014
Where: Le CinQ
When: 9 p.m. – 3 a.m.
Who: 18 + Hardcore Club Kids
Why: This nightclub has come far from its days as a chapel and now is one of the most alluring venues in downtown Montreal. Within its industrial-chic walls, patrons will experience a swarm of hedonistic pleasures for the eyes and ears including an all-night open bar, modern circus performers, top DJs, and dancers wearing only a thin veneer of paint. 'Wild' does not begin to describe the New Year's celebration happening at Le CinQ this year.

7. Montreal NYE Club Crawl 2014
Where: Multiple Venues, Starting from Bar St-Laurent Frappe
When: Doors open at 6:30 p.m., Buses Depart at 7:45 p.m. –
Who: 18 + Experience seekers and the Indecisive
Why: If it's a rule that you must spend New Year's Eve in one location, then the year's Extravaganza Club Crawl team is breaking it in style. Join this outrageous assortment of students and young partiers as they storm the city, visiting 4 ultra-elite nightclubs. Upon arrival at the club, partygoers will not pay a cover or wait in line before entering. Worried you'll miss out on something while in transit? Super fun contests and prizes will keep the party going from bus to bar and back again.

6. INTRIGUE 2014 - VIP TREATMENT
Where: Ivy Nightclub
When: Starts at 8 p.m.
Who: 18 + Montreal's Nightlife Elite
Why: An intimate gathering of 800, made up of Montreal's trendiest, most worldly clientele—and you're invited. This is your chance to indulge and experience VIP treatment at its finest. The energy will steadily build up as 5 DJs spin all and as state-of-the-art sound and light consume every surface of the club. At midnight, everything comes together in a deafening crescendo of balloons, champagne, and cheers. A child of the New Hollywood scene, you'll never feel more like a celebrity than at Ivy Nightclub.

5. New Years Eve 2014
Where: Club Entourage
When: 8 p.m. – 3 a.m.
Who: 18 + Your Most Eclectic Group of Friends
Why: New Year's Eve has a reputation for being pretentious and all about rules and resolutions, but that is not the case at Club Entourage. There, you and your friends can actually dance and mingle to your heart's content. Friendly bartenders keep drinks full throughout the night. And no matter where you are—the dance floor or on Entourage's heated patio—partygoers will be immersed in live DJ performances.

4. CARNAVALESQUE 2014
Where: Cabaret Lion D'Or
When: 9 p.m. – 3 a.m.
Who: 18 + Fetish Thrill Seekers
Why: A mix of inviting circus, carnival, and burlesque combined into one thrilling show that will be sure to excite the senses. The evening tops off in a live New Year's Eve 2014 countdown, but not before guests are treated to stunning visual displays set to the theme of Asian Carnival. Since the performances will likely leave guests speechless, it is a good thing that Carnavalesque also offers an open bar option for mouths that have gone dry in awe of this lavish spectacle.

3. Fluid New Years Eve 2014
Where: Club Soda
When: 9 p.m. – 3 a.m.
Who: 18 + Rock-all-night-ers
Why: Big, loud, crazy good time—these are just a few ways to describe the New Year's Eve party at Club Soda. Here, you can fist-pump, grind, and gyrate to the hottest songs and sounds with three world-class DJs spinning at the helm. Club Soda is the longest running all-inclusive party in Montreal—and when they say all-inclusive, they mean it. No need to bring your wallet since drinks, tips, and coat check fees are all included in the price of your ticket. Consider upgrading your ticket to VIP status to get even more great perks.

2. NYE 14 GALA AT HYATT REGENCY
Where: Hyatt Regency Downtown Montreal
When: 8 p.m. – 3 a.m.
Who: 18+ Upscale Socialites
Why: A little less fist-pump and a lot more style is how the Hyatt does its New Year's Eve Gala. Guests enjoy an evening in the Hyatt's resplendent, and newly refurbished, Grand Salon, where the hotel will serve a sumptuous 3-course meal and open bar option. Glamour, good friends, and your couture ball gown are all you need to complete your red-carpet fantasies.

1. CELEBRATION 2014
Where: Olympia de Montreal
When: 9 p.m. – 3 a.m.
Who: 18+ Rowdy Party Animals
Why: By far the largest all-inclusive party in Montreal, Celebration brings together 2,500 nightlife connoisseurs and clubbers to experience the most lively party in the city. Besides 4 DJs and a live band, the bar is open all night and in multiple locations to make sure everyone stays properly served through midnight. VIP tickets are worth the splurge for extra perks, such as VIP private lounges, coat check, and premium liquor. Nobody is partying bigger or harder than the beauties at Olympia de Montreal's Celebration 2014.