Arsonists Take Down Another Montreal Restaurant

Share All sharing options for: Arsonists Take Down Another Montreal Restaurant 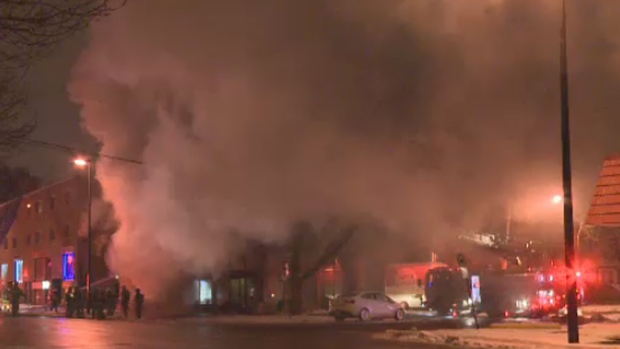 Once the realm of Mafia-heavy east end Montreal, where scores of cafés, convenience stores and restaurants have been vandalised over the years, a spate of recent firebomb attacks has hit establishments west of the Main.

The victim this time was the tragically-named Fuego kosher steakhouse on Côte St-Luc road, corner Beaconsfield. Just last week the restaurant was in full Chanukah mode. Then today, at approximately 4:46 a.m., a three-alarm blaze broke out and sent one firefighter to the hospital. In a curt statement owner Amir Toledano told reporters he did not know why his business was a target. The discovery of accelerants on the scene by the arson squad is a strong indicator that the fire was deliberately set.

More recently Sel Gras, which took over the old Bu space on Saint-Laurent boulevard in Mile End, was razed to the ground mere days after the restaurant's inaugural service. Ownership has since begun to rebuild.

Investigators and the likes of B'nai Brith and Combined Jewish Appeal have yet to find evidence that the Fuego and Chops fires have been motivated by anti-Semitism.