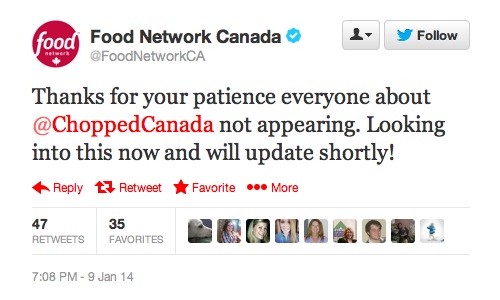 The debut of Chopped Canada drew record numbers for the Food Network but the follow-up was a bit of a fail. The reality competition show normally airs at 10:00 p.m. ET on Thrusdays. All viewers in Montreal and Toronto got at that hour yesterday, however, was a rerun of Restaurant Makeover.

After that, damage control was on.

Thanks for sticking with us! Due to technical issues, tonight's new episode of @ChoppedCanada will air at 11 ET/PT.

Ok #ChoppedCanada fans - it's finally happening! Thanks for your patience and let's have some fun!

New airtime for #ChoppedCanada tonight is 11pm. Thanks for your patience while technical issues are sorted. @ChoppedCanada

Some were grateful for the late start.

Thanks to @ChoppedCanada for delaying till 11pm (after service !) so we can cheer on @DanielJanetos tonight! #ChoppedCanada :)

And a few loyal fans proved that old cliché about Canadian civility.

.@KRam41 Lucky to have such great (+ extremely patient!) fans. Thanks again, we appreciate your understanding.