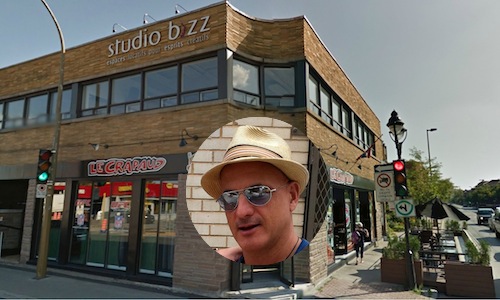 Stephen Leslie is about to add another establishment to his restaurant portfolio. The chef/owner of N.D.G.'s Monkland Tavern and Westmount's Tavern on the Square ventures to another part of town, however, for his new baby.

Le Sieur d'Iberville will replace the old Le Crapaud bar on the southwest corner of Mont-Royal and d'Iberville sometime in February or March. Leslie describes it as a "big project" and a "wood rotisserie/bar with a lot of my favourite things to eat." The new restaurant has different partners from both Monkland Tavern and Tavern on the Square.

· The actual bar will impress: "110-year-old 3-4"-thick planks from this place that was in Lachine. They're about 8' long and weigh a ton. Beautiful stuff."

· So will the rotisserie: "It weighs over a ton. Half wood, half gas, sexy beast. Will rotisserie crazy I think. Lamb, duck, veg, etc. Planetary Gear System. Means: while the whole spit rotates so does each individual spit. As in the earth rotates as it rotates around the sun."

· The name pays homage to the locale: Pierre Le Moyne d'Iberville, born in July 1661 at Ville-Marie, now Montreal, was known as Le Sieur d'Iberville. To quote Wikipedia on the subject: "Le Moyne was a soldier, ship captain, explorer, colonial administrator, knight of the order of Saint-Louis, adventurer, privateer, trader, and founder of the French colony of Louisiana of New France."

· Leslie digs the Louisiana connection: "We have many plans for Sunday brunch. It will be very New Orleans-French-South."

· The establishment sports some authentic flourishes: "This, believe it or not, was behind a jiprock [sic] wall. The restaurant was a tavern in the '50s (of course) and this is the old beer delivery system. It goes downstairs into the cooler - where you load the pints onto metal shelves - and brings it upstairs. We're almost done refurbishing it. It will get a glassed-in front (to keep our Molson pints cold) and we are having old style tavern fridge door made for the rest of it. It's so badass."