Is the Founder of Globeater a Scam Artist?

Share All sharing options for: Is the Founder of Globeater a Scam Artist?

Bryan Stone is a photographer and co-founder of Globeater.com, a Montreal restaurant guide "launched by 3 marketing and advertising gurus with a combined 35 years of experience in the field."

What is more worrisome, however, is the fact that Stone has regularly run afoul of restaurateurs in the city.

[Stone] called us last Saturday night before service asking if he could take some photographs for Globeater and maybe if we liked them we could buy them for our own use. I told him we weren't really interested in buying photos but I didn't really care about him coming in and taking some shots for the site. He showed up around 6:30, 7:00-ish and started taking photos. The rush hit, he started getting in the way and Will [Cody, Maïs chef and co-owner] told him to shut it down. He then asked for a plate of tacos to eat and take photos of. The server gave him the bill, he got up and said he got some nice shots and he'd come back Tuesday to show us. Then he leaves without paying his bill.

MacNutt went on to add.

He didn't show up that Tuesday, so Will called him and told him that we were interested in the photos. So he shows up [Wednesday] and asks if we [want to purchase them]. Will told him to pay his bill and see where it goes from there. Our server started to print out a bill and the dude starts to leave so Will stops him and gives him the bill (just for 4 tacos) and the guy got in his face. He was talking about how it was bullshit and how he was going to attack us on Yelp, Urbanspoon... Will then asked him to take our photos off his site and that his bill would be waiting here for him when he was ready to come back and pay. He also called us hipsters, which hurts my feelings.

It looks like Stone made good on his promise to slander Maïs, as this Urbanspoon review, dated February 19, suggests. 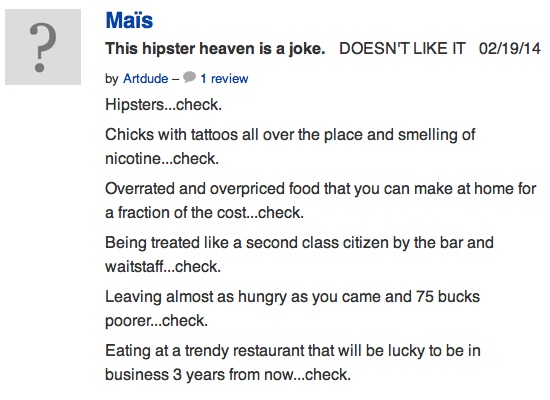 The man at the centre of the controversy, for his part, alleges that Maïs "said I could take food photos so I did. I asked if I could eat [the tacos] and they said yes. It was an uncomfortable environment. I wasn't asked to pay."

"Do you plan to compensate the restaurant for the food you ate?," Stone was asked today.

A source familiar with Stone spoke today on condition of anonymity, describing the photographer as "manipulative" and even "potentially dangerous."

"He comes in, eats with friends or family and skips on the tab. He takes pictures of food and eats everything on the table. He eats and leaves, that's his thing."

The source went on to add that Stone had gone so far as to brag about his exploits on Facebook.

Have you had a run-in with Globeater or Bryan Stone, positive or negative? Drop us a comment below or, anonymously if you prefer, here.