In "Pizza + Sushi = Pizza n° 900", La Presse columnist Marie-Eve Fournier chronicles the grand plans of Alexandre Brunet (photo) to franchise a chain of "authentic" Neapolitan-style pizza shops across the city and province with the help of Dominic Bujold, the founder of Sushi Shop. If the name Alexandre Brunet is obscure to most, his Stromboli (Aliments Cinq Sens) pizza and menu at Mangiafoco, in tandem with Simple Plan guitarist Jeff Stinco, may not be. The 39 year old was bit by the pizza bug at the age of 14 and has spent the past two and a half decades in pursuit of perfection, or, as he told Fournier, "de la bonne pizza à prix raisonnable, revenir à la base."

Théâtre Outremont on Bernard will serve as the base for Brunet and Bujold's first Pizzeria No 900 restaurant (900 refers, natch, to the pizza oven temperature). Brunet also has plans to deliver Margheritas to the Montreal masses from a No 900 food truck. The mobile pizzeria, a first in Canada, will, ostensibly, cook a pizza in 90 seconds flat with the help of a wood-fired and gas oven. The idea takes inspiration from the popular Del Popolo truck in San Francisco. 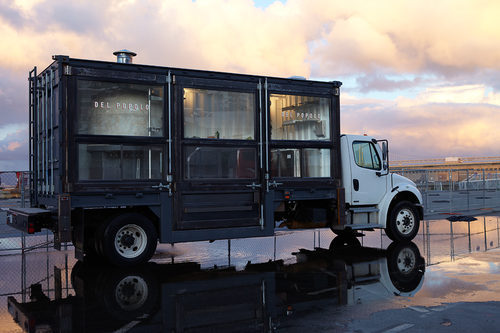 To prepare his formula for No 900, Brunet drew on over two decades in the pizza business and ate at over 35 pizzerias in New York City over the course of three days. And while a trip to Italy did not pan out, Brunet also spent time in California to obtain a Neapolitan pizzaiolo certificate. The entrepreneur also has plans to make his own mozzarella and secure a reliable supply of fresh, organic basil and San Marzano tomatoes from a Rive Sud farmer.

No 900 will take over the Théâtre Outremont space held by another Bujold venture — the defunct Ian Perreault Prêts-à-Manger. Franchise applicants can expect to invest up to $200,000. Fournier writes in her article that while the two associates have no target number of n° 900 restaurants in mind, Bujold is wildly ambitious: "On ne vise pas seulement le Québec. C'est un concept exceptionnel qu'on pourrait amener partout dans le monde."