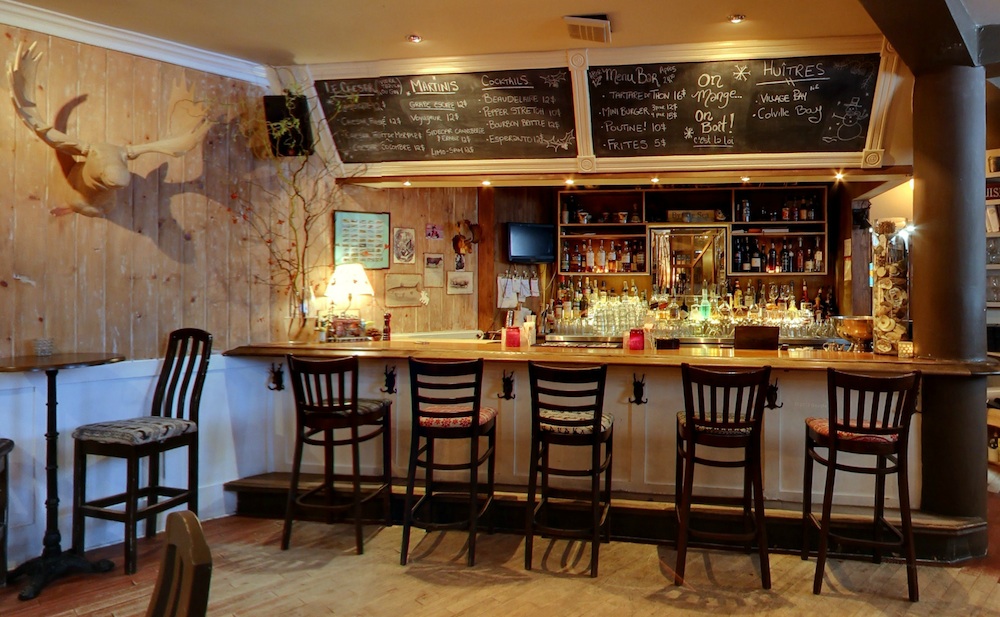 Dan Geltner, chef at L'Orignal in Old Montreal, has been shaking up the Monday night restaurant scene with his fun and affordable Industry Nights aimed at providing cheap drinks, good food and all around good times for those who cook your meals, clear your plates and pour your wine during the rest of the week. The good news is it's open to everyone and has been slowly turning into one of the best places to go on a night when many Montreal restaurants give their staffs a much-needed break.

A native Montrealer, Geltner's culinary path began in CEGEP when he took an aptitude test to help him decide what to do with his life. He was given three job possibilities: military officer, school bus driver and chef. Opting for the latter, Geltner embarked on a very successful career that so far has included kitchen stints in Canada, Israel, the Cayman Islands, St. Lucia, France, and New York City (with Daniel Boulud at Bar Boulud).

Geltner took over the kitchen at L'Orignal in December 2012 and launched Industry Nights shortly thereafter.

When you took over as chef at L'Orignal, what kind of style of food did you bring with you?
I'm definitely at heart a French chef, and French cuisine is my favorite cuisine. I'd love to say that our food at L'Orignal is French, but it's not totally true. The techniques are definitely based on classical French cuisine but I'm more influenced by international flavours, local produce and obviously by the countries I've worked in and traveled to. At the root it's French, but we're definitely playful about it and at the end of the day, our restaurant is L'Orignal (The Moose), so we try to put a big focus on meat and especially game meats.

Tell us a little bit about Industry Night.
This is where a lot of the playing happens and a lot of the dishes on our new menus end up coming from because we do these nights on Mondays where we invite friends and family to come for dinner. We usually do a $25 menu for 2 courses and we cook food that you wouldn't think to see on our menus, which could really mean anything – we could be cooking out of really old cookbooks, we could be doing Asian food, we could be doing street food, basically there are no rules and we let the kitchen staff's imaginations go wild and see what we can come up with. A lot of our dishes are created that way, just by having fun and doing things we wouldn't normally do.

Where did the idea come from?
It's always been a thing at L'Orignal, even before I was the chef there and then I think I helped (owners Travis Champion and Monica Terlecki) rejuvenate the idea and bring my own energy to it. Most restaurants in Montreal are closed on Mondays, which means that industry people are off work, so it just started from that. It was kind of a two for one: here is a place to go out and on top of that we're going to use this as an opportunity do great food and drinks at really good prices. We've done guest nights too where we invite other chefs to participate. It's become a really inclusive, fun night, full of familiar faces and just really good times. It's more than just Industry Night, it's about collaborating, making ourselves better, hanging out together, promoting the restaurant scene and the food scene in Montreal. There are lots of collaborations and fun stuff to come this summer, for sure.

How do you think the restaurant industry is changing?
It used to be that cookbooks were super expensive, chefs would always be hiding their recipes, nobody did collaborations and everyone was secretive about what they were doing and how they were doing it. Nowadays, cookbooks are so cheap, there is so much information online, instead of people hoarding their ideas and recipes, everyone wants to share and learn from each other to grow the industry as a whole. It's all about doing menus together, working together and helping each other be better chefs. We're very patriotic and proud of our cuisine here in Montreal and there's so much talent, why not get together and learn from each other? There are so many chefs that I respect in the city and I can't wait to have the opportunity to work with them. The possibilities are endless.