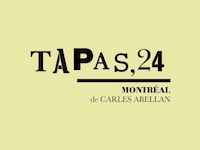 Jorge da Silva Jr. of MTL Cuisine reports that his restaurant group will make an official statement next week about the Montreal outpost of Tapas24 from popular Barcelona chef Carles Abellan: "We will be publishing a press release next Tuesday May 20th with all the details which in turn will kickstart our media campaign." The Old Montreal restaurant is expected to open sometime in June. [-EMTL-]