Share All sharing options for: Meet the Team That Wants to Overhaul Montreal's Legendary Laurier BBQ

The rebirth of the Laurier landmark will divide the considerable space in two: Lorbeer, a brewpub and platform for Stinco and Le François' West Shefford brewery, and Laurea, a vehicle for Hakim Chajar, a former Les Chefs! contestant and a chef with past stints at Meadowood, Troisgros and Laurie Raphaël.

While some nods to the old Laurier BBQ will be in evidence, they will be subtle; the Danny Lavy and Stephen Shiller property is in the midst of a major overhaul. At this juncture, a June or July open seems realistic; the better to showcase two terrasse spaces (one, on Laurier proper, another on the second floor under a retractable roof) while the temperature is opportune.

Stinco, Le François and Simard sat down to talk about the ambitious new project.

Jeff, you had a relationship with (landlord) Danny Lavy at Rufus Rockhead and Le Shinji, correct?
Jeff Stinco: Yeah and I knew Danny from Mangiafoco too. Basically I'm looking for places in Montreal that I love. Mangiafoco started because it was 45 feet away from the condo I was living in. I started with [Old Montreal bar] Philémon. It was a great experience but I sold my shares and I was looking for another project. Mangiafoco came about, we built it and it's doing very well. We're very happy with it, very proud of it.

I really love the work. There's a show aspect to it, there's something very theatrical about being in the restaurant business. And I love the side that resembles what we do with the band in the studio: the kitchen. Very structured, you have to be very on par with what's going on elsewhere but at the same time find your own voice. And it's mystical for me, because I'm not a chef. So I'm around people that are teaching me things, I'm learning a lot.

So basically Danny — we knew this place was not going well, that something was going on, like everybody else. One of our partners talked with him about doing something different here. The Laurier BBQ thing did very well. It was one of those landmarks in Montreal but it isn't anymore.

Eric Lefrancois: (Laughing) Actually Danny called us desperately. Even after a few months with Gordon Ramsay, it was a mess already. He was asking us to at least do a consultation or whatever. Then he sold the place to [Nick] Nakis and while Nakis was operating he was still asking us, can you do something. Then we finally accepted the opportunity to run the restaurant. It took a long time to decide what we would do with the place. At that time we loved the area, the space but what about the Laurier BBQ?

Jeff: The concept, where we were heading …

Eric: What do we do with the fact that it's so well-known in the neighbourhood?

How do you mess with an institution, in other words.
Jeff: We didn't want to mess …

Jeff: Eric and I are very afraid of large spaces. We are in Montreal, there [are] many, many restaurants. We liked the idea of doing two projects in here. We played with the idea of partnering with other people …

Eric: We were sure that the place had to be split.

Jeff: Because we didn't even know that there was a second floor that was this large until we visited the place. I suppose that [the upper floor] was used for groups but the past group had never really exploited it. Even me, as a kid, I used to eat downstairs. So we felt that splitting in half was very important. And obviously we did have an agenda: we brew beer in Bromont. So for us we needed to have visibility in Montreal, we needed a space where we could be seen. And man, Laurier is one of the best avenues in town. So we felt that it would be a great - how do you say that — storefront in Montreal. So one half will be a little brewery, very design, there is a demand for that in Montreal. Something well done, well-designed. Beer brewed here on site by a master brewer, in the spirit of what we're doing in Bromont. That's one side of it, that's Lorbeer. 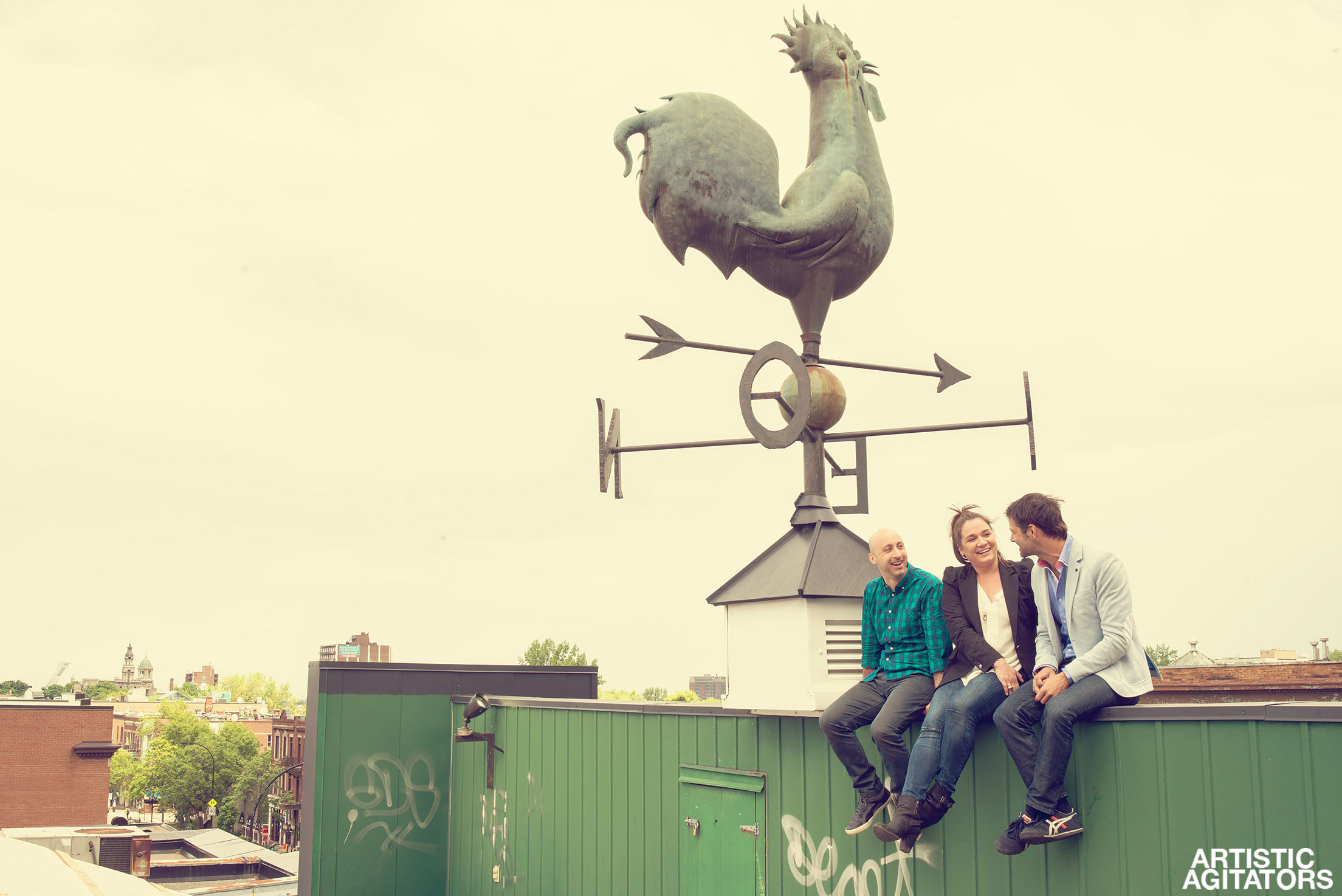 Laurea. I worked with Hakim on the menu for Rufus early on. Eventually Hakim wanted to do many, many things. Shinji opened and Shinji needed help. Hakim came in and really helped us so much. So when we thought about doing something here, a lot of chefs were [considered]. We talked to a lot of people. And then we spoke about Hakim. He's amazing, he's good, he's a character. (Laughing) He's such a character! And we like that. We like that energy. We want to be surrounded by great people and he's so talented. And he needs structure, he knows it. He needs to be around a group that will help him structure his ideas. That's what I bring to the fold. I've traveled so much, I've eaten in restaurants over the last fifteen years all around the world. So basically I know what I want as a client. And I'm very picky. And we're just gonna make good food here. Laurea is about great cuisine. Hakim likes to call it —

Jeff: We're not really sure what that means. What I know is that he's going to basically generate the kind of food that he loves to make. He's got a lot of influences that are, like, Mediterranean, and it's healthy, it's well-done, it's well-prepared, it's simple.

Jeff: It's just well-executed cuisine. Accessible too. There's one thing that we did with Shinji that I want to keep on doing — Mangiafoco's the same too — great food, well-done, in a space that's not white cloth, not stiff. It's accessible, perhaps a little loud. I'm ok with that. I want people to socialize. For me a restaurant is a place — if you eat at a restaurant you want to meet people, socialize, eat great food. And I like to eat at a restaurant where I can't make food at that level. So that's important to me. Those are the basic elements that I wanted to bring in. And the reality of it for the rest is that Eric is a coordinator in this project, he's been handling the whole thing from the start. Whenever I'm not super happy with the direction I get in but that's what it is. And we like to have someone who will guide the spirit of the place. And we give total freedom to that person to reach out to people, talk to people, receive the people and Cindy's that woman.

Who is the designer? Is it your old collaborator Bruno Braën?
Eric: It's Rebecca Bourque. She did Edgar Hyperlodge in Bromont, adjacent to the brewery. She's been working with me for many years and she's in Sutton, so it was a no-brainer to call her about this project. I love working with her. She's original and it's easy to work with her. That's important because when you work with well-known designers sometimes …

Jeff: Bruno Braën is one of the most brilliant designers I've ever met in my life. He's just so creative. But it's hard to organize projects and know precisely what your timeframe is with a guy who's creative like Bruno. At Shinji and Rufus it made complete sense. We wanted that. We wanted to go as crazy as possible and carte blanche to Bruno. But in this particular place, the projects were overlapping. We just felt we needed to work with other people and it just made sense logistically. It was more viable to have someone else come in here. And honestly we had a good idea of what we wanted to do with the space. The space itself is just amazing.

Eric: We wanted to keep a little of what was here before. For sure we changed almost everything but the walls but the aesthetic is there.

I wanted to ask you about that. You have people in the neighbourhood who grew up eating here who are grandparents now. How do address concerns that you're radically changing a place some people regard as an institution?
Eric: Well we have some plans for the Laurier BBQ brand. We're not here to talk about that …

Cindy Simard: But to respect the institution that was Laurier BBQ we decided to keep the name, albeit in another language: Laurea and Lorbeer.

Eric: It's delicate. You don't want to shock people from the neighbourhood. I have the Taverne Normand, that was an old tavern that was completely empty, it was a little pathetic. And people didn't want us to touch it. But after some time, hey, you have to live in the present. Like La Binerie Mont-Royal, I bought it around fifteen years ago and kept it for one year and it was a catastrophe. You have to look at it this way — the original Laurier BBQ was sold to Danny Lavy. He partnered with Gordon Ramsay and it was a failure after five months. The Nakis family took over, and failure again. All as Laurier BBQ. We don't want to be the next failure.

Jeff: We're going to be respectful with the name. We're not killing the look of it. There's a sense of keeping the tradition but at the same time we're not going to cook chicken. We might have a wink to the past, it's gonna be Hakim's version. A liberal interpretation of the concept. So the idea with it is yeah we're in the area but if we're successful people will forget and forgive us for changing the look. And if we fail we'll be suckers (laughing). It's like with music, you know, I always make parallels. I can make the best record in the world in my opinion but if nobody buys it then, well, what can I do.

Cindy: We're always mindful of the old clientele of Laurier BBQ. We want to respect them and welcome them here, even if it's changed.

Eric: But we're not striving for comparisons. If we did a new rotisserie chicken place, there would be comparisons. That won't happen with a brasserie, brewpub that serves a completely different type of food.

Jeff: And the concept itself is there's somewhat of a very democratic, very simple setup and a setup that's a little more, you know, nighttime, nightlife, on the other side. I think that complement will touch a lot of people and at the same time the reality of it is, I believe in Hakim's cooking. I'm really betting on that.

David McMillan Is No Longer With the Joe Beef Restaurant Group