The Best Poutine is in Arkansas, Critic Declares

Share All sharing options for: The Best Poutine is in Arkansas, Critic Declares

A restaurant in the Arkansas home of Walmart makes the best poutine, declares a food critic for the Arkansas Democrat-Gazette.

In "Getting Piggy in Bentonville", Philip Martin visits Tusk & Trotter, an "American Brasserie" from chef Rob Nelson in Sam Walton's former general office and warehouse. After a few droll remarks about Bentonvile - "it's easy to get the feeling that this part of Bentonville isn't exactly a real place -- it feels more like a Disney-erected simulacrum of a more Low Midwestern than High Southern farming town" - Martin tests the restaurant's take on the bellwether dish from la belle province.

Speaking of foods that some might deride as declasse, the absolute star of our evening was Tusk & Trotter's version of poutine, the French-Canadian gravy and cheese curd over fries concoction served in dive bars and bowling alleys all over Quebec. Seeing how people can become futbol experts by watching the highlights of the U.S.-Germany match on Sports Center, it's appropriate that -- by virtue of a 2013 trip to Montreal in which I sampled a couple of the local versions and found them unnervingly comforting -- I declare myself a connoisseur of poutine. And I can state unequivocally that T&T's poutine ($18.95) is the best I've ever had.

Tusk & Trotter's poutine, however, calls to mind this BuzzFeed lament from 2013 - "Why Can't America Get Poutine Right?" - in that it seeks to improve upon a dish that needs no improvement and, moreover, is not poutine.

To wit, chef Nelson's "poutine" is "based on meatloaf of Angus beef and sausage, topped with pate gravy, tomatoes, green onions and 'herbed' feta cheese served over pommes frites." 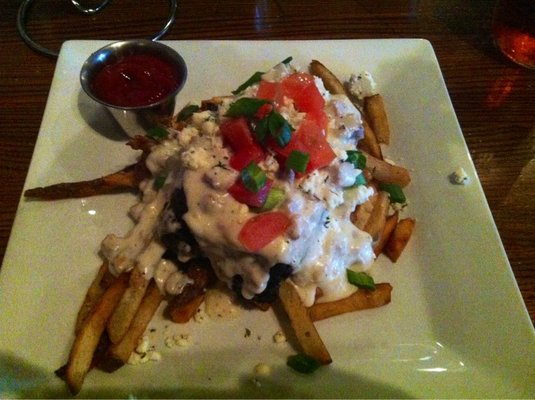 In another pronouncement antithetical to the casse-croûte classic, Martin adds that "there are delicate and discrete layers of piquancy and spice apparent in each bite." Nary a reference to squeaky curds.

· "I had the Poutine. I had no clue what that was. It was the best meatloaf served over great fries with a gravy poured over everything." - Josh C.

· "They make three varieties of fries. We had the basic fries which were excellent. Went back the following evening and had the Poutine (meatloaf) and Chicken & Waffles." - Jill J.

· "Think you don't like meatloaf? Then you have never tried the poutine at the Tusk & Trotter in Bentonville, AR. It's everything you think meatloaf isn't. Flavorful with garlic, pepper, and other spices. Perfectly cooked, not dry at all. Served with perfectly cooked pommes frites. Calling this meatloaf should be a crime." - Chuck U.

Calling this poutine should be a crime as well.