Share All sharing options for: Fairground Pop-Ups in Full Swing

Pop-up restaurants are nothing new to the Montreal food scene, but chef/entrepreneur Emilia Jamieson is trying to give them a more creative spin with her recent culinary events under the banner Fairground.

Run out of her commercial loft space in Point St. Charles, Jamieson hosts a range of pop-up gatherings, from cooking classes taught by notable Montreal chefs, instructionals on how to cook gluten free, vegan dinners, Indian cooking classes and even yoga and dinner combos. All the events are informal, BYOB and are accompanied by music from Jamieson's musician boyfriend, Jeffrey Louch and his jazz trio. Jamieson's father, DJ Pimp Vortex, who usually plays at Furco and The Sparrow, also likes to make guest appearances.

"The idea is to let the guest chefs do a lot of improvising", says Jamieson. "We want them to get to do what they want, but to also try and put a healthy spin on it." Just last week chef Dan Geltner did a whole Middle Eastern themed vegetarian dinner with the help of his sister, Debbie, and Derik Singh for about 35 people. It was a huge success. 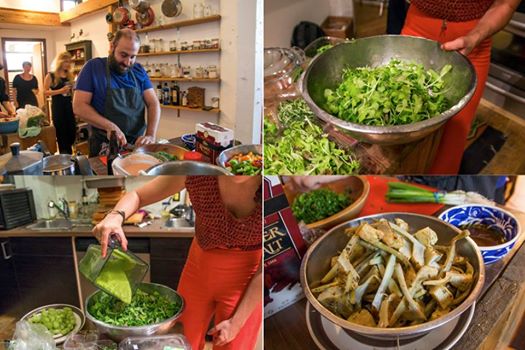 "We really want to create a community of people who share the same passion as us. The name Fairground came from that - a bringing together of people, food and music in a very relaxed and casual atmosphere. We also want to keep it cheap! In the end, it's just a really good party."

Next up on the Fairground roaster is a Chak Wow pop-up dinner with Thai food guru Jesse Mulder on August 19th. The menu for the evening has yet to be determined but if you've ever sampled Chak Wow's fiery food, you know it will be good.

Jamieson's own background includes making delicious, healthy food for places like Le Kitchen, and C'est La Vie, but she also does private catering and has a lot more pop-up dinners in the works. The Fairground website will be launched soon, but for now just email all inquiries to Jamieson: emiliajamieson(at)hotmail(dot)com