Dispatch, known for their sleek mobile coffee truck and more recently, their wildly popular (and addictive) cold brew, now have their very own brick and mortar location in the works. The owner, the very lovely Chrissy Durcak, aims to have the coffee bar up and running by September, where they are also going to roast their own beans and brew their cold coffee.

"For now, it's just a lemonade-type stand in the front for cold brew," explains Durcak amid the bare bones of her new Mile-Ex space. "The idea is that roasting is going to be the foundation of the business, and then the truck, the cold brew and the coffee bar will all stem from it."

For that coffee bar, Dispatch will be the first coffee shop in Montreal to have a Modbar system. Engineered in Fort Wayne, Indiana, by a group of very serious coffee geeks, it's a modular brewing system where most of what goes on happens underneath the counter, out of sight. What is visible is a series of taps, very similar to beer taps, where customers can see their espresso brewing right in front of them.

Super cool/futuristic coffee bar aside, it all comes down to the beans. For Durcak, finding the right bean supplier requires a lot of research and work, not something she takes lightly.

"We want to be very transparent about the whole process. We're currently looking for green bean buyers who have the highest quality standards (no pesticides, picked by hand) and work with co-ops or microlot farmers. We also want to make sure the farmers we get our beans from are getting a fair wage."

For now, and especially while it's still hot outside, Dispatch's cold brew really seems to hit the spot. Initially, Durcak was trying to figure out a way to get coffee to people by making it fun and accessible. Iced coffee could be brewed ahead of time, required minimal equipment to serve and made perfect sense for the spring/summer seasons.

"With the cold brew, we can sell a lot of coffee in a portable format." And by portable format, she means filling up kegs with that dark, delicious, ice cold brew, ready to serve. The smart, stylish, reusable bottles and growlers (so you can stock up on cold coffee at home) also help seal the deal. 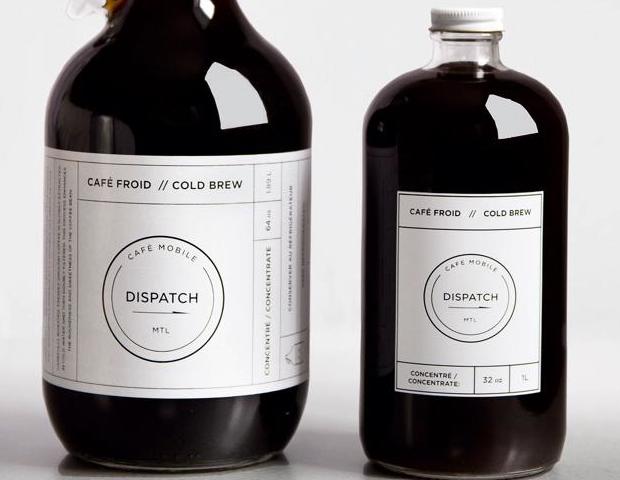 Until the shop is up and running, coffee lovers will just have to get their Dispatch fix from the truck, or head over to the storefront at 267 St. Zotique West (next to Manitoba) Friday to Sunday from 10:00 a.m. to 4:00 p.m. for fresh, cold brew.