With over 15 years experience in the hospitality industry, Cassady Sniatowsky is definitely a man that knows how to eat and drink. On any given night you can find him at some of Montreal's best known restaurants, or even lesser known restaurants, usually sitting at the bar and chatting with the owner or chef, but always drinking a bottle of really good wine.

It all began in 1995 when his father opened Kaizen Sushi Bar, followed by Treehouse, which was where Snistowsky started as a busboy. Both restaurants were well-loved Montreal mainstays that have since closed, Kaizen just last August. Now, working at the acclaimed Norman Hardie Winery in Prince Edward County, Ontario, Sniatowsky took the time out to talk about wine, food and why working at Norman Hardie is such a great gig.

Tell us about your experience in hospitality.
My father who had owned Avenue Video had become interested in Japanese food as he had been going to Japan frequently for business and trade shows. He first opened Kaizen Sushi Bar back in 1995 and so began my family's initiation into the restaurant game. I started when I was 17 as a busboy in Treehouse/Kaizen Restaurants, which my father had created with chef Tri Du at the time. I was quickly trained as a bartender and I naturally became interested in wines in relation to the restaurant partly out of my own personal interest and partly out of necessity for the restaurants. People who have influenced me greatly over the years in relation to wine in Montreal are Brian Desilet, Bill Zacharkiw, Ryan Gray, Vanya Filipovic, Nick Hamilton, David McMillan, Nico Snyman, Theo Diamantis, Dominic Allnut, James Graham-Simpkins, Elyse Lambert, Veronique Dalle, Francis Martin, to name a few as the list could go on and on.

When did you first become interested in wine?
I was first introduced to the world of wine while I was going to high school in Amsterdam. My family had moved to the Netherlands in the mid-nineties. We had a corner wine store where my mom and I would buy a case of a different Belgian or Dutch beer at every few weeks, and a bottle of wine every so often for a family dinner or just to try and learn about a different region. At the time I found deciphering wine labels, grape varietals, and winemaker names extremely daunting and confusing. I also found it difficult to enjoy drinking many of the wines I was being recommended. It took me years to discover what I liked and longer to interpret and articulate why I liked them. This detachment between enjoyment and being able to talk about it both intrigued me and intimidated me. One thing I've learnt is just trust your instincts; no one should tell you what to like.

How important is it to you to match food and wine?
Wine and food are intrinsically linked. I'm not as into the idea of pairing small pours of wines with dishes as I once was. I think it is interesting and can be fun but my current opinion on pairing is that I like to enjoy bottles of wine with dinner and see how they evolve and change as the meal progresses. You can't get a full picture of a wine from a few sips and smells. I have opinions on what wines work well with what foods and what foods don't work with what wines but I think it's important to focus on what you like. We all taste and smell things differently and our palates can be very different.

When did you get interested in the whole winemaking process?
I first got seriously interested when a close friend, who's a chef, traveled through Burgundy and the Loire valley with me in 2008. Seeing how wine is made gives drinking it a new breath of life. To understand the work that goes into it is really a beautiful thing.

When did you decide to head out to Norman Hardie?
My close friend James who manages Liverpool House had done the harvest with Norman in 2012 and was talking about going back last fall. I had just become unemployed for the first time in 15 years so I wrote Norman and decided to volunteer and help throughout harvest. I had just come out of managing/winding down my family's restaurant and was looking for some soulful rehab. 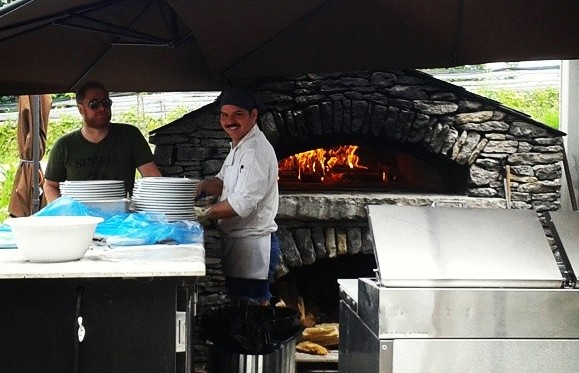 What's it like working there?
The team is like a family that grows and contracts at times. The summer in Prince Edward County is beautiful and the working conditions are pretty amazing; we run what I think is the best pizza restaurant I've ever been to. We all take turns at different jobs various cellar jobs, talking to people at the tasting bar, serving, making pizzas, doing dishes, cleaning up, maintaining the vegetable garden, planting new vines, bottling, etc.... In the fall once harvest begins the life becomes a lot more intense as we have less days off & very long work days. The harvest is very fulfilling though as you are seeing the seasons work translate into the harvested fruit and seeing the fruit become a fermenting must and eventually a wine.

What kind of wines are you enjoying drinking at the moment?
Recently at the winery I've been into our Norman Hardie 2013 Riesling which is very dry and refreshing and the newly bottled Gamay/Pinot 2010 blend from The Grange of Prince Edward which is very playful. I'll always be drawn to drinking the mineral driven white wines from Chablis and fresh and juicy Gamays from Beaujolais! In general I look for wines with a lot of energy and freshness. I want to feel like it wouldn't be a chore to finish the whole bottle and I want to be able to grab a sense of place from the glass.

Where do you love eating in Montreal at the moment?
Whenever I come back to Montreal I try to hit up Vin Papillon, Nora Gray, Liverpool House, Cafe Den, Gia Ba, and Lawrence. I have a bunch of others I wish I went to more often like Maison Publique, Hotel Herman, Au Pied du Cochon and Salmigondis. We are blessed with so many great restaurants in this city and people who really love to have a good time.

Since Kaizen closed, would you consider getting back into the Montreal restaurant game?
It's very possible, I'm not making any decisions at the moment but the situation would have to make sense on a few levels.

Does wine make you happy?
Wine itself doesn't necessarily make me happy but sharing it with people I love and care about does make me happy. I don't look for happiness in the wine, I look for it in the time I spend drinking it and talking about it with my loved ones and close friends.