Charles Bierbrier is the man behind the Montreal microbrewery Bierbrier Brewing Inc. His last name derives from the German word for 'maker of beer' - which is precisely what his family did generations ago in Europe.

Bierbrier himself (like many of us) became interested in beer in his late teens. By 1999, after much experimentation with recipes at home, he decided it was time to pick up where his ancestors had left off and follow the family tradition. For many Montrealers, their first taste of Bierbrier Premium Ale came several years later at Joe Beef, the influential Little Burgundy restaurant. From that very visible and prominent platform the small outfit grew and, over time, Bierbrier started popping up at restaurants and bars all over the city.

Charles Bierbrier recently took some time out to discuss the business of beer in Montreal.

Do you remember the first time you drank beer?
There's one moment that sticks in my mind which occurred when I was around the age of 18 years old. Not my 'first' beer, but my 'first' significant beer. I was travelling throughout Europe that summer and found my way into a pub in London and discovered some of the most delicious brews I had ever tasted. Nothing like I had tasted here before. That really gave me the bug and upon my return to Montreal, I really stepped up my home brewing and recipe formulation.

What made you want to get into beer making as a profession?
I always had a passion for brewing and beer. I was fascinated by centuries old breweries in Europe and how local ingredients would dictate the style and flavour of beers in various regions. After visiting some of these breweries and tasting the delicious beer, I was hooked. I knew one day I wanted to start my own brewery. Maybe it was in my blood, too.

Was it harder/easier than you thought it would be?
Absolutely harder that anything I could have imagined… but also the most rewarding. We're making a quality beverage and there's so many factors that go into the brewing process that need overseeing. There's also all the regulation and paperwork to make and distribute alcohol, not to mention all the usual aspects to running a business like sales, marketing, finances, distribution, management, staffing, etc… So, yes definitely a huge undertaking but I wouldn't have changed a thing. 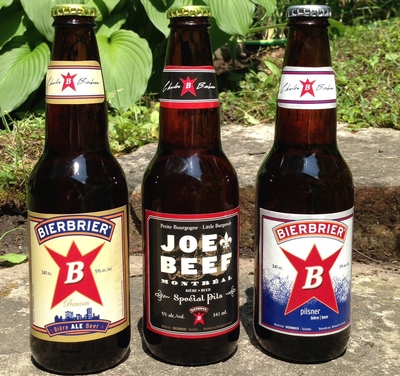 Tell us about the beers you're making.
Our original brew is the Bierbrier Premium Ale. A delicious smooth golden coloured ale brewed using Canadian and British specialty malts and hops. Our second brew was the Bierbrier Pilsner which is inspired by the Czech Pilsners in Europe using only European malt and hops. We also developed a special brew for Joe Beef, called the Joe Beef Special Pils. We also recently came out with a lighter Lager which we'll be selling at the Royal Merchant and L'Orignal. All our beers are all-natural, contain no preservatives or additives. We import non-GMO malt and hops from Europe and work directly with the hop growers and maltsters to ensure the highest quality ingredients go into making our beer. You can taste the difference.

What is the best beer and food pairing you've ever had?
I love beer with everything… but if I had to choose, I'm a fan of beer with barbecue. Especially in the summer!

What is your personal favourite thing to eat with your beers?
For some reason every time I'm out these days and enjoying a beer I seem to be having oysters…

Microbreweries and craft beer are huge right now. How do you think Montreal is faring compared with the rest of North America?
Montreal has a great reputation globally as a world-class city. We're known for fashion, nightlife, food, and drink. Beer is no exception. We have a terrific reputation, and a lot of the beer being made here is top-notch.