The classic doughnuts suspended in Bernie Beigne’s storefront window are just one of its over 20 varieties, which include maple-glazed and Froot Loop-encrusted

A brand-new, but old-school doughnut shop began serving sweet glazed rings to snaking queues out of its unassuming storefront on Bernard Street over Mother’s Day weekend. The team behind Bernie Beigne now have their heads down as they ready for what’s poised to be a successful grand opening this Friday (May 14).

Father-son duo John and Dean Giannarakis and friend George Giannopoulos are at the helm of the new operation, which draws inspiration in doughnut size (large) and price (low) from the old-school Jewish and Greek purveyors of decades past.

“We wanted it to be a feel-good place in the neighbourhood where anyone, even children, can come with $5 in their pocket and get a coffee and a doughnut or maybe even two,” the younger Giannarakis says.

With the classic glazed variety coming in at $1.50 and a box of a dozen at a reasonable $16, Bernie Beigne is just about able to compete with the pricing of even a chain like Tim Hortons. Deluxe toppings bring the price tag up to $3 a piece, but considering many of the city’s other beloved doughnut shops typically kick off at around that number, it remains a very welcome addition to the scene. 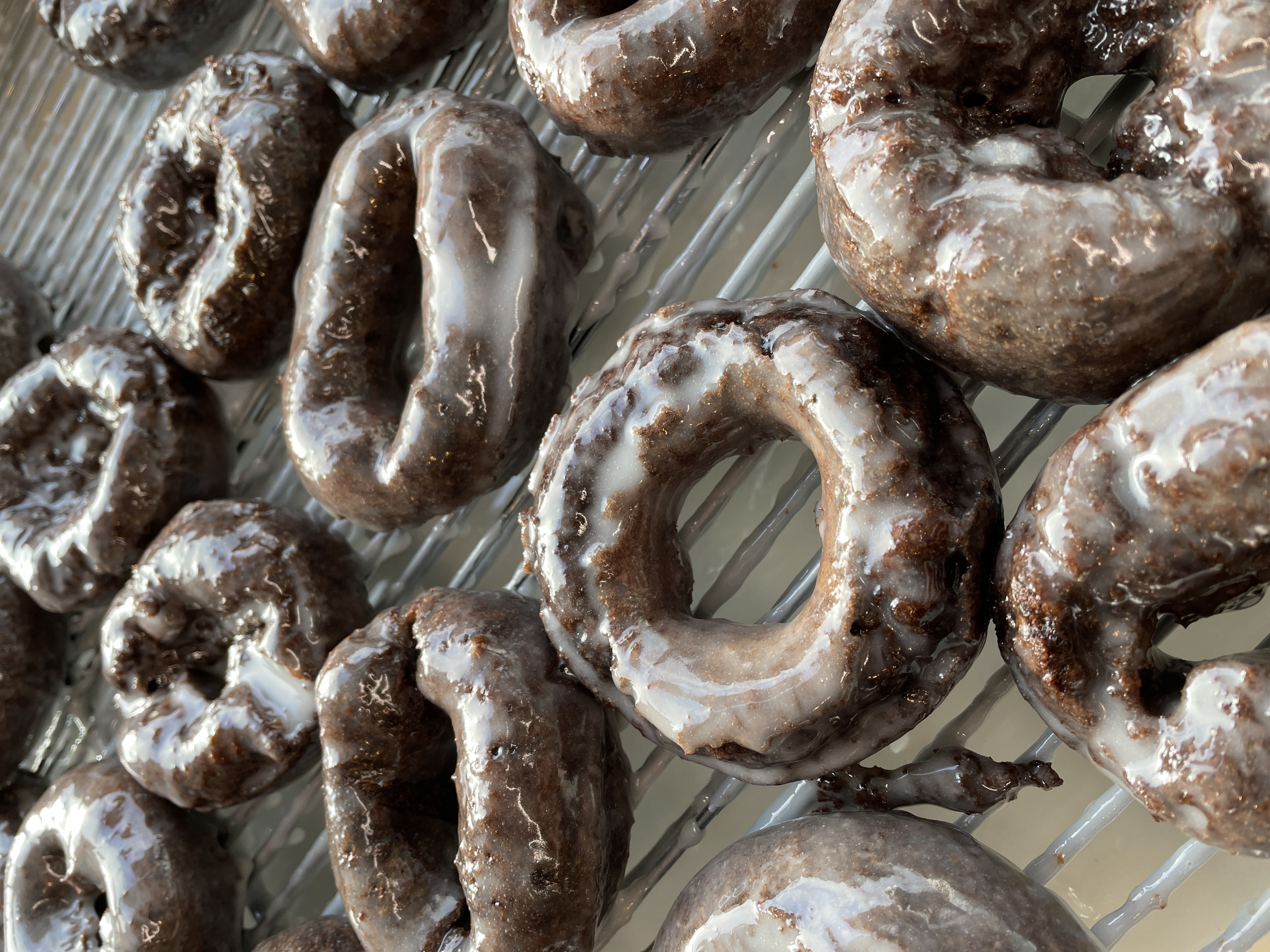 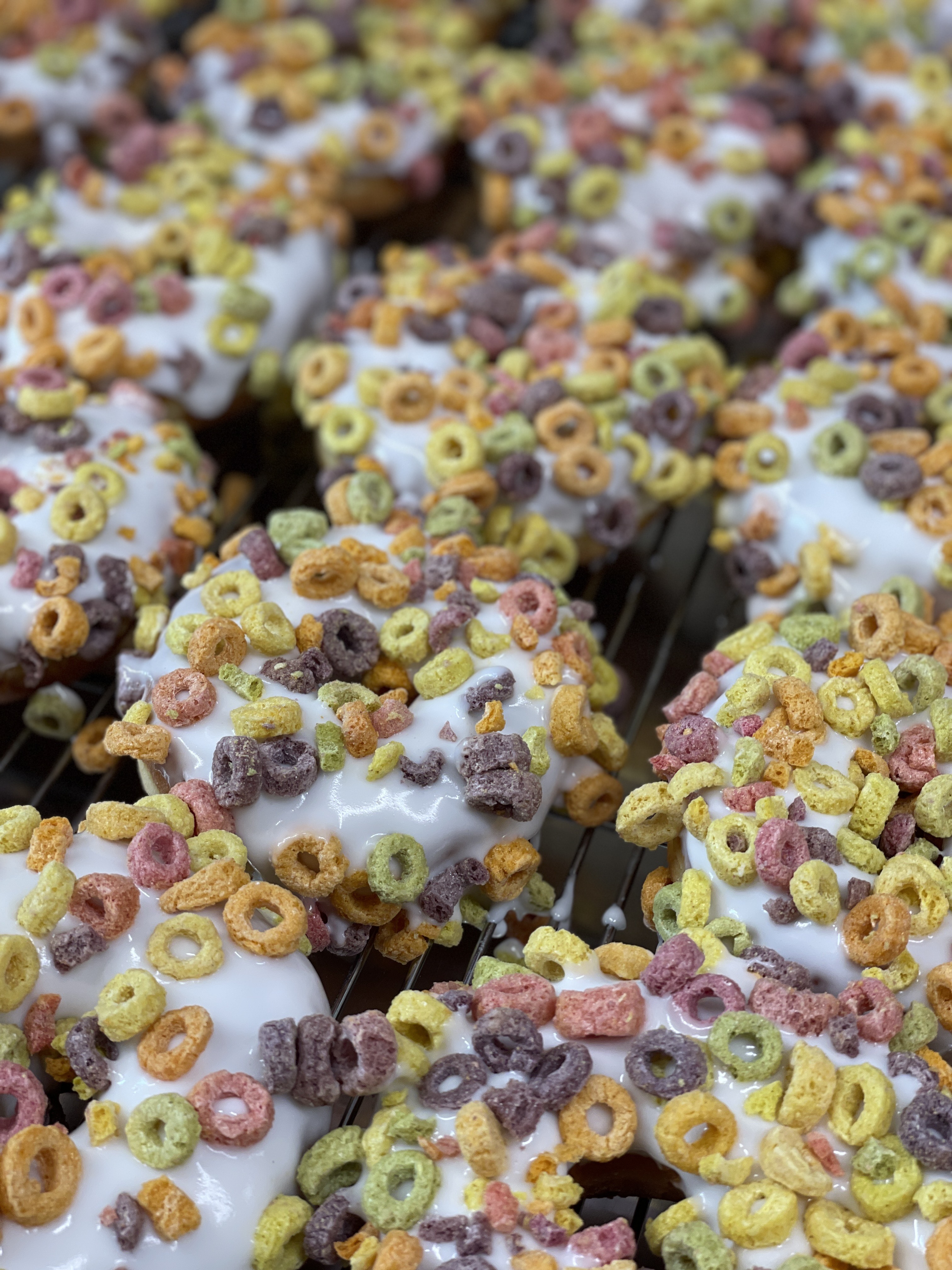 Once operations are in full swing, passersby will be able to peer through the window as a doughnut maker glazes the jumbo-sized confections before mounting them on display. Fresh ones, awaiting their turn, will be bobbing in vats of oil in the background. In addition to its selection of light and pillowy yeast doughnuts, Bernie Beigne is offering cake doughnuts, which are heavier, more moist and, well, cake-like in taste and texture. In total, there will be just over 20 flavours to choose from, including Boston cream, maple-glazed, peanut butter and jelly, Cinnamon Toast Crunch, Froot Loops, and rainbow sprinkles. Cinnamon rolls, apple fritters, and braided rolls will also be on offer.

“My father, John, and his childhood friend, George Giannopoulos, approached me with the idea a few months back, and I loved it. Montreal needed something like this, especially after the year we’ve all had,” Giannarakis says. Giannopoulos is the son of one of the founders of home-grown Greek restaurant chain Au Vieux Duluth, Montreal Gazette reports.

Located on Bernard Street, just west of St-Laurent, Bernie Beigne saw two sold-out doughnut days this weekend, signalling that Mile End denizens are charmed by the idea of something other than more chicken right now.

Bernie Beigne officially opens at 23 Bernard Street West on May 14. Thereafter, it’ll operate Wednesday to Sunday, from from 10 a.m. to 6 p.m., or until supplies last.